“this book is filled with a whole new universe full of objects of mystery, high flying adventure, monsters, espionage, Indiana Jones-caliber action, and a whole lot of fun characters.” – Aintitcool

Comic Anthology based on characters from the bestselling novel ‘Fallen Heroes’ available now!

They are murderers, martyrs and mercenaries in the no-man’s-land between adventure and crusade – soldiers of fate and fierce honour, bound together in mystery, darkness and blood. Their enemies are shadows haunting the outermost borders of a darkening world, and as night approaches the shadows grow long. They are the Fallen, and these are their stories.

In November 2011 Tales of the  Fallen, a collection of four stories featuring characters from “Fallen Heroes” the urban fantasy/new pulp  novel by Barry Nugent and a  no.1 best-seller on Amazon, was  launched at the Thought Bubble Comic Festival. After a successful launch the comic, including a special introduction by Jonathan Ross is now available to buy. 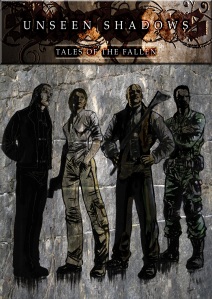 Check out previews of all the stories here

What is Tales of the Fallen about?

Tales of the Fallen,is a throwback to the hero pulps of old, weaving four tales of high adventure, vengeance, mayhem and magic but all with a modern day spin.  The collection is stand alone so you do not need to have read the novel to enjoy the comic, of course there is some extra value to be gained if the book has been read first.

One member of the creative team that is keen to stress that the target audience for the anthology is not limited to readers of the novel is Fallen Heroes author Barry Nugent.

“Tales of the Fallen can be picked up and enjoyed without having read a single page of the novel,” promises Barry. “I guess it could be viewed as a introduction to Fallen Heroes or give those who have already read the book a deeper understanding of the characters and some of the situations only hinted at in the book.”

Cy Dethan, writer of the acclaimed Cancertown, Slaughterman’s Creed and more recently White Knuckle reveals what readers can expect from the anthology “The book is a collection of “expanded universe” stories and  range from high-powered adventure to all-out slaughter and the credits list reads like a who’s who of guys I’ve been dying to share page space with for years..”

What are people saying about Tales of the Fallen?

“This is a powerful volume, packed full of shocks, surprises and intelligence. From my perspective, there’s nothing else like it in comics shops around the world! “– Sci-Fi Pulse

“ Utilizing an entire team of writers and artists, ‘Tales of the Fallen’ is visually diverse and an interesting journey to experience. Each story feels as if it plays to the individual teams’ creative strengths and there is a level of excitement in seeing such a showcase. “ – 3 million years

“Tales of the Fallen is a high octane, high adventure, pulp-tastic anthology ” – The Sidekickcast

“A pretty wide vista of action and pulpy possibility:”– NewPulp

Where can I pick up Tales of the Fallen?

This special 128 page anthology also contains previews of the first issue of the comic adaptation of the novel, creative bios, character bios and as is available for at the special price of £10.00 from the Unseen Shadows Shop. .

The indivdual stories are also available digitally from Graphic.ly

More information on Tales of the Fallen can be found here