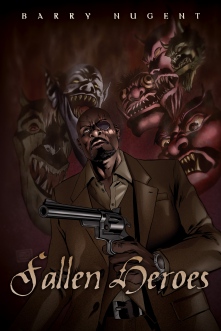 A stalker of demons and legends, a pair of master criminals, a teenager on the brink of madness and a man forever cursed with the desire for vengeance. They are all pawns in a plan set in motion over nine centuries before their birth. Pursued across the globe by enemies both human and supernatural they must overcome their mistrust of each other and uncover the truth before it destroys them all.

The book reached the number 1 spot on Amazon twice.
Stocked in the biggest book shop in Europe.
Sold out at several branches of Waterstones.

“It reads like a TV series, with cliff hangers at the end of most chapters, and larger than life characters with big egos and quick wits. The book as a whole draws on many popular culture references & influences, and is easily compared to ‘Sin City’, ‘The Da Vinci Code’, ‘Heroes’ or ‘Buffy’ – there really is something for everyone and I would thoroughly recommend it to anyone that enjoys reading or watching Sci-Fi/Fantasy.” – Waterstone’s

“‘Fallen Heroes is a stylish debut filled with sparkling characters in a skilfully drawn adventure that heralds the arrival of a bright new talent.”– Fantasy author, James Barclay

“This was a really, really good read. It reads like Indiana Jones meets James Bond, which is an awesome combo right there. What more could you want than spies, thieves, rogue government agencies, cults, booby traps and a bald guy with an eye patch?”

“This book was a rollercoaster of action and excitement. Great character development and a real visual read! Although this is not typically my ‘type of book’, I loved it and highly recommend it!”

“I loved this book from beginning to end and struggled to put it down. I’ve not read a novel for a good few years and this has made me realise what I have been missing.”

“Barry Nugent’s book is an adrenaline ride from start to finish. It reminded me of a Da Vinci Code-style thriller which throws you from scene-to-scene as layer upon layer of a mystery is unwrapped before your eyes.”

“The book shares some similarities with the Heroes TV show, because Fallen Heroes also presents a large ensemble cast of seemingly unrelated people. Then over the course of the book the links and interwoven plots start to fall into place one by one.

I think Fallen Heroes will go on to launch a series of pulp stories from Nugent and I think a TV series of the book would be a surefire winner too.”

* excepts of reviews on Amazon.co.uk and Amazon.com