Page 33 is a great point to have an update on The Chimera Factor. This stunning page (which is pretty epic) from Plwoods signifies the end of the first act of this story.

What better way to end a first act than with a potential fight about to kick off between our two Heroines. 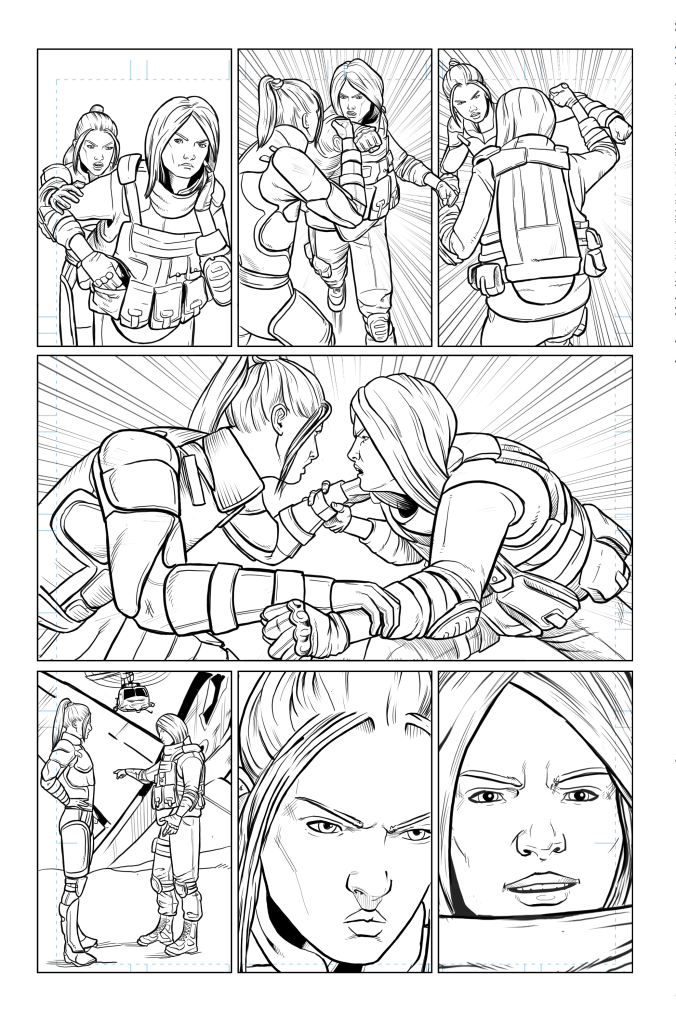 Looks like Steph and Victoria are having a little disagreement

The creative team are working flat out to get this ready for launch at this year’s Thought Bubble so please keep your fingers and toes crossed!

Last week saw the digital release of Wrath of God on ComiXology but what some of you may not know is the Reverend, the two gun wielding vigilante who stars in the comic, made his debut within the pages of the Fallen Heroes prose novel. I thought it might be interesting to give you a little insight on one of the pivotal scenes from the comic and its relationship to the novel.

When Jonathan Bishop aka The Reverend  awakens from his coma with a new face  it was one the most important scenes for the character in Fallen Heroes and yet most people have never read the scene. I cut it from the final draft because I was scared that by revealing too much of the Reverend’s past it would diminish the mythic quality I was trying to instill in  the character.

Cy Dethan who wrote the script for the Wrath of God comic was the first person I let read the  scene and the moment he read it it gave him the central themes he wanted to explore with the Reverend.

The subject of the Reverend’s training is never address in the novel because it was not needed to be. I wanted The Reverend to arrive  immersed in his crusade and at the top of his game. Now, however, I have the wonderful luxury of being able to say to people “If you want to know how he was trained and learn more about his past then here’s Wrath of God.” this notion of making the comics 100% canon as far as novels are concerned has been something that has become more and more embedded with each new Unseen Shadows project.

What we get in Wrath of God is Cy doing a brilliant job of expanding on the Reverend’s past without diminishing any of the power or mystery of the character. It was also a delicate balancing act because we wanted a story that could stand alone and apart from the novel but at the same time reward readers of both. For me personally it was great to work with Cy on fleshing out the Reverend’s past and answering a few of the questions I never tackled while working on the novel.

Here’s  Cy had to say about how he see’s the Reverend.

“To me, the Reverend represents the purest form of personal commitment – an implacable crusader with every outward trace of humanity literally burned away. No act is too monstrous or sacrifice too great in pursuit of his understanding of justice. I needed to know what could do this to a man, and whether the madness was always in him. Hopefully, we’ve gone some way toward answering those questions in Wrath of God.”

So without further ado here’s the original scene  from Fallen Heroes.

Irene had talked one of the other nurses into making her rounds for her, and now here she was for the first time in the restricted wing.  She admitted to not being very impressed; a couple of armed guards and that was about it. She walked gingerly into the room where the unknown patient was being kept. It was hospital policy to check on all patients, even those under government protection.  He was just laying there, his face hidden behind a thick layer of bandages.  There was no doubt in her mind that he was still in a coma; feeling a little cheated by the anti-climax, she moved to the door.

Too shocked to speak, Irene slowly turned round to find the patient she thought comatose now sitting bolt upright, his unusual eyes, the only hint of what lay under the bandages, scrutinising her every movement.

“What day is it?” he asked, his voice no more than a whisper, but for some reason, it sent shivers through her, and the desire to be anywhere else but here was foremost in her mind.

The patient sighed heavily and slowly climbed out of his bed.  “I am alive,” he said, staring out of the window.

The urge to run screaming from the room and call someone, anyone was almost too great for Irene to ignore, but before she did, there was one question she needed answering.

“Sir, I need to know, we’ve all been waiting to know since you got here, who are you?”

The patient turned from the window, and Irene found herself looking into the strangest eyes she had ever seen.  They were an unnatural colour; Irene tried to put a name to the colour…jade, that was it, jade.

The patient walked up to her and removed the bandages from his face.  “I am wrath,” he said sadly.

The “deleted scene” from the Fallen Heroes novel that inspired this layer of Wrath of God’s flashback structure served as both a partial explanation of Jonathan Bishop’s metamorphosis into the Reverend and an open question in its own right. It follows on from Bishop’s literal “baptism of fire” at the hands of the drug lord, Vincent Gonzalez, and essentially charts the agonising process of a lost and fallen man being born again.

The whole concept of Bishop’s conversion is drenched in Christian mythology in the novel, and yet framed in a profoundly alien and threatening light. I’d go so far as to say that most of my understanding of the character was informed by reading this scene in the information pack Barry sent me. The sadness, the disconnection, the violence – the essential core of the Reverend is all at work here. – Cy Dethan (Writer)  Wrath of God

1) Cut to a close-up of the Reverend, his face a freshly healed wound. There are bandages, recently removed from his face, hanging loosely around his neck and shoulders. We’re in a hospital room, by a washbasin with a large mirror set above it. The Reverend, looking notably younger than in the previous scene (with more and darker hair), is gazing at his reflection with an expression somewhere between sadness and amazement. He’s dressed in a hospital gown.

We’re going to have several timelines running through this story. As a suggestion, it might be worth emphasising each strand with its own, unique colouring style or other easily distinguishable visual device.

THIS IS NOT MY FACE

2) Pull back. The Reverend turns away from the mirror, looking lost and hopeless. A nearby nurse (Irene Dickinson, for continuity fans) steps toward to help him. She looks genuinely concerned. There are two “spook” types in dark suits, armed with handguns in the room with us, but we needn’t see them both in this panel. Just a hint of one of them partially in shot would be plenty.

ONLY THE EYES BETRAY HIM, AND AS I LOOK INTO THEM ONE LAST TIME I BELIEVE I FINALLY UNDERSTAND…

3) One of the spooks steps forward to intercept the nurse. He raises his weapon to threaten her. The Reverend notices, looking up sharply.

THIS IS THE FACE OF A DEAD MAN—

4) The Reverend gets up in the spook’s face, his expression instantly hardening to a frightening degree. He presses the spook’s pistol down firmly with one hand. Both the spook and the nurse look taken aback.

All of this work led to this final page of art bringing together that fantastic work of Cy Dethan (Script), Steve Penfold (Art), Nic Wilkinson (Letters) and Gat Melvin (Colours). 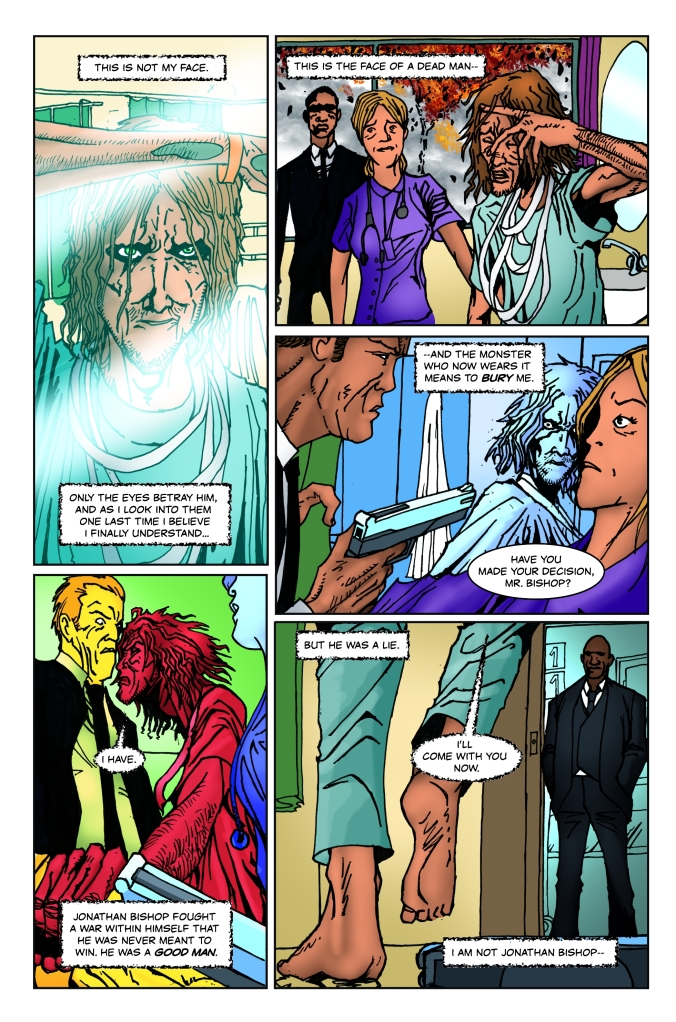 Hope you enjoyed this this little look behind the scenes.

About Wrath of God

The Reverend: a holy weapon forged in tragedy and flame – a murderous martyr whose cold judgement strikes with the force of a vengeful God. Despair, for the Reverend walks among you. He is the right hand of vengeance. He is Wrath.

From the twisted brain of Cy Dethan comes this 22 page story following Fallen Heroes favourite The Reverend; a cold blooded and ruthless killer hell-bent on a path of righteousness and destruction. 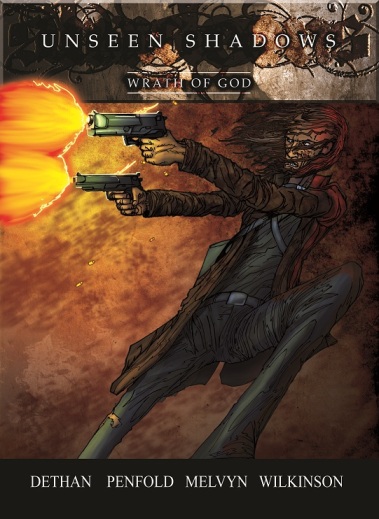