With work on the one shot ‘The Lament of Lady Mary’ nearly complete writer Pete Roger looks back on his involvement with the project.  Over to Pete… 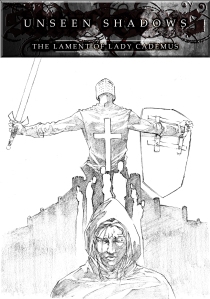 Having read and loved the first novel, Fallen Heroes, I was honoured to become part of the wider creative team that Barry assembled. My first contribution to Unseen Shadows was a one shot called Fragments of Fate, centering on occult expert and adventurer Professor Napoleon Stone. 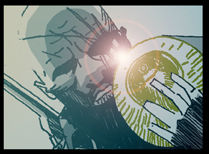 When I was asked which other character I’d like to focus on for my next story, I knew it had to be cult leader Sir Oliver Cademus.

A knight of the first crusade and founder of the Book of Cademus, a cult it is said that continues to exert its influence today, long after Oliver’s supposed death. His return has been prophesied for several centuries by his followers.

The story I came up with was entitled The Lament of Lady Mary, and it focuses on Oliver’s relationship with his parents and in particular his Mother, the Mary of the title.  Working on this one-shot meant I was able to read sections of the as yet unpublished second novel Forgotten Warriors, and it also meant I had the chance to work with artist Conor Boyle, who I’d been wanting to collaborate with since I first saw his work.  It also meant I got to write a period piece, with the story being set around the time of the first crusade, which scratched a major writerly itch for me.  I did lots of online research into the period, watched plenty of Game of Thrones episodes, sat in Cardiff Castle grounds making notes and listened to the Kingdom of Heaven and Robin of Sherwood soundtracks as I pulled the story together. 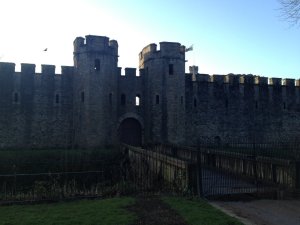 I worked very closely with Barry, who edited the story, and it was great to be working with the person who created the characters and universe I was playing with, a bit like writing Spider-Man under Stan Lee’s watchful eye. Barry pushed me to ditch my initial quite obvious idea that skirted around some of the plot points raised in Fallen Heroes, giving me the confidence to dig deeper to find a more personal, and far more potent narrative that felt like an integral part of the Cademus legend.  I proof read a PDF of the one-shot earlier this week, and I’m extremely proud of the story, it’s quite possibly the happiest I’ve ever been with my own writing.  I feel I got the balance right here, offering a first time reader an interesting story, while also having  the potential to have a real impact on someone who is already firmly immersed  in the world that Barry and the other associated creators have developed.  I can’t wait for it to be released, so people can see a different side of my writing and feast their eyes on Conor’s truly stellar work. 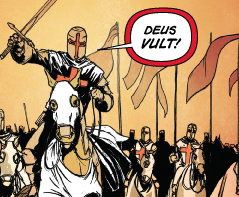