I could not have said it better myself Frank.

The final draft of Forgotten Warriors is now complete. Now there’s nine words I was beginning to think I would never say. The story is now in the capable hands of an editor to proofread and sense check. The copy will then be returned to me to go over the changes and send back for a final edit. Hopefully after that Forgotten Warriors will be ready for publication.

It’s been a long, fun, painful, soul destroying and soul uplifting process, getting to this moment but finally the end is finally in sight.

In celebration of this milestone here’s a sneak unproofed peek at the some of the opening prologue, featuring two familiar faces from the climax of Fallen Heroes.

The battlefield was a tapestry of nightmares, woven from torn flesh and shattered bone. At this distance the thousands of bodies strewn across the blood soaked earth were little more than dark specks.

So this is victory.

At the head of the battlefield, where the main body of fighting had taken place, a few specks moved. These, Oliver guessed, were looters seeking food or coin in the clothing of the dead.  He wanted to hate them but in this unforgiving land he had learnt faith alone would not fill an empty belly.

Oliver ignored the cheers from those around him. There was little to celebrate save that, by God’s grace, they had been spared to breathe this cursed land’s foul air for another day.

It had been here the Turkish horse archers had attacked, their arrows slicing through Oliver’s men with gruesome precision.

Sir Thomas, a friend of Oliver’s father, had fallen in that first skirmish, taking an arrow to the eye. Oliver had tired to reach him but the old knight’s screams were silenced by a second volley of arrows.

Oliver gently ran his fingers through his horse’s mane. It was a ritual he had perfected to keep the horse calm. The beast snorted and shuddered beneath him, its hooves stamping the earth in frustration. Oliver shared the beast’s desire to be away from this slaughterhouse.

The stench of rotting flesh, cooked by the noonday sun, was everywhere. However it was not the smell that made Oliver want to retch it was the sheer absurdity of it all. Where was God’s love in all this reckless slaughter?

On this account I, or rather the Lord, beseech you as Christ’s heralds to publish this everywhere and to persuade all people of whatever rank, foot-soldiers and knights, poor and rich, to carry aid promptly to those Christians and to destroy that vile race from the lands of our friends.

Trapped here, in this crucible of heat and death, the honeyed words of the Pope brought little comfort to Oliver. Did his holiness think the Turks would see the love of the one true God as they cradled their dead?

After a year of war Oliver Cademus had seen little holy in this crusade. He had answered a blood soaked call to arms to further the ambitions of powerful men. His father, Nicholas had warned him he did not have the stomach for war.

In the holy lands Oliver learnt the truth of his father’s words. Every night those he had put to death would visit him, whispering curses in the darkness of sleep.

Oliver gripped the reins and spurred his horse forward, his thoughts turning to England and home. He used to see his old life as stagnant and unfulfilled but now he would give anything have it again and to see his mother.

“Thinking about home again my Lord?”

Oliver stiffened and turned to the newcomer, who now rode beside him,

“Oh it’s you Jacob,” said Oliver, his hand moving from the hilt of his sword and back to the reins.

Jacob Covenant was tall, his features hawkish in appearance, though his thick beard helped to give the hard lines of his face a softer edge. He was not dressed in knights’ garments but rather those of a common solider.

“I was thinking about my mother,” said Oliver. “She’s a painter and a fine one at that.”

“What does she paint?”

“The last thing I saw her paint was a portrait of me before I set out on this fool’s errand.”

Oliver’s grumbled response had come just as the he and Jacob rode past a detachment of men.

“Choose your words with care my lord.”

“Forgive me,” said Oliver, rubbing his eyes. “I did not mean to speak ill of our faith.”

But rather those who would smother it with their own desires.

“You are a knight, you have no need to seek my forgiveness,” said Jacob. “It is I who should seek yours for forgetting my place.”

Oliver was certain Jacob knew what his place was in the world and it was not as anyone’s lackey. It was one of the reasons Oliver respected the man. Jacob had also saved Oliver’s life, a fact Jacob was embarrassed to be reminded of.

“You never did tell me if you had any family Jacob?” asked Oliver.

“You never asked my lord.”

“Well I am asking you now.”

A vacant expression settled over Jacob face as he spoke.

The word ‘had’ was meaning enough to Oliver. He stumbled over his words as he sought to sooth the wound he had opened.

“Bear it no mind my lord,” said Jacob, waving away Oliver’s dismay. “It was a lifetime ago and I have made my peace with it.”

“Nevertheless I am sorry for your…”

The sounds of screaming tore the rest of the sentence from Oliver’s mouth. Looking ahead he saw several columns of thick black smoke curling upwards, invoking images of some giant terror unfurling its dark wings.

“Is there no end to this madness?” bellowed Oliver, turning his horse toward the smoke.

So it’s been a while but Unseen Shadows never goes away, we linger in the…well…um…shadows.

Unseen Shadows will be heading to the Thought Bubble Comic Festival  in Leeds this weekend and we will not be going empty handed. We will be launching two comics (Knights of Cademus and The Lament of Lady Mary) at the festival and our very first graphic novel ‘The Heart Which Makes Us’, which clocks in at a lovely 100 pages.

As well as the new comics we will also be launching the recently completed audio movie (which is one part prose,one part audio movie and about ten parts adventure!) Empire of Blood. The first three episodes of this four part audio movie are available to listen online for free.

As well as all this you will also be able to pick up the Fallen Heroes novel and the comic anthology Tales of the Forgotten.

Barry Nugent, founder of Unseen Shadows had this to say about the launches. “I am extremely proud of what the creative teams have done on these projects and looking forward to spending the weekend showing off their work.”

All the comics being launched at Thought Bubble are available to pre-order here.

I also was a guest on the Awesome Comics Podcast recently to talk about the project.

The Unseen Shadows team will be on table 71 in the Thought Bubble Marquee (aka the Teepee) so come and check us out!

I know, I know it’s been a while since you’ve heard from the Unseen Shadows crew  but rest assured the team have beavering away on several projects. First up is the news that we now have an artist for our Choose your own adventure story Napoleon Stone and the Army of Set.

The story has been written by Richmond Clements (Historia, Operation Solomon) who will be joined by his Historia artist Alex Moore who is getting her teeth stuck into the project as I type.

Here’s the first look at some early sketches from Alex. I reckon this is going to be my new wallpaper! 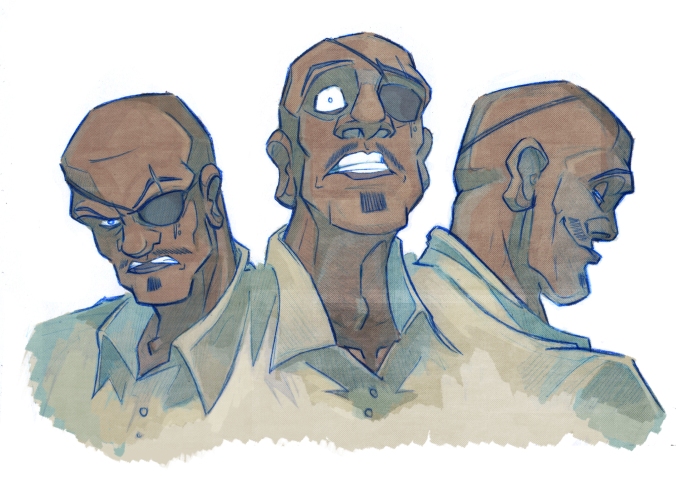 I was a huge fan of Alex’s work on Historia and more than a little excited by seeing what she’s doing even at this early stage.

The finished book will be available both in digital and printed form.

It’s been a little while since we had an update but have no fear the wheels are still turning behind the scenes here at Unseen Shadows. To prove it here is a first look at page 5 from the Napoleon Stone/Nathan Ash comic Ashfall by Dan Thompson, Paul Mclaren Paul Williams and Darren Brown…enjoy! 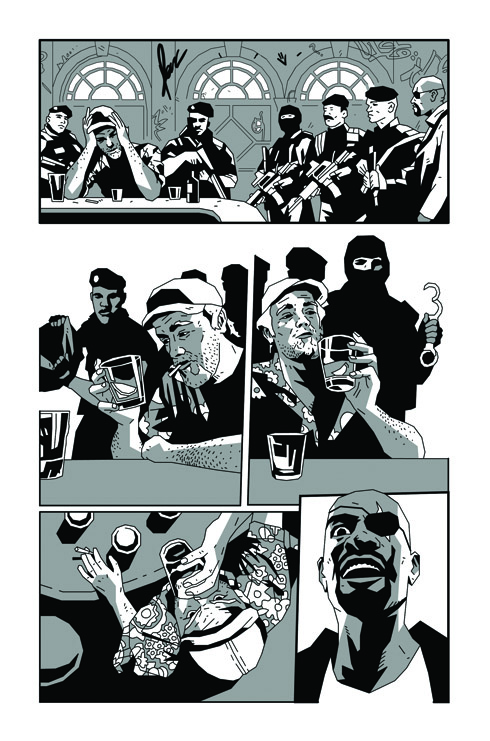 Work is picking up on the Napoleon Stone adventure Ashfall by Dan Thompson, Paul Williams, Darren Brown and Paul Mclaren. Think I’m kidding? well here is a peek at the full colour version of page 1 for you to enjoy. 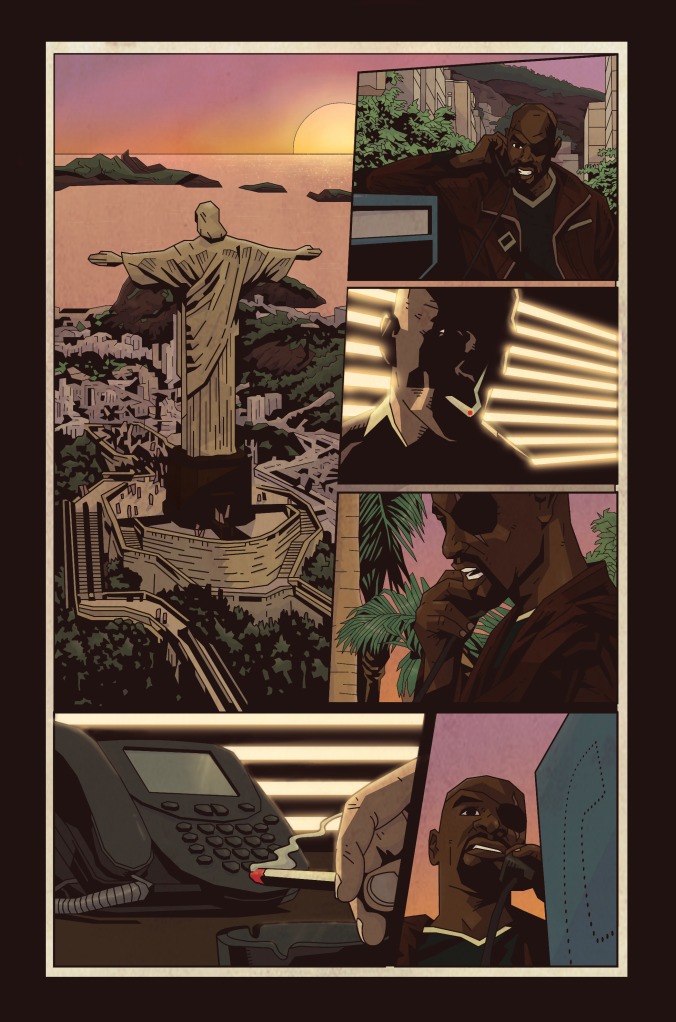