In this latest edition of’Behind the Shadows’ where we take a look at some of the Unseen Shadows projects a little more closely. Today’s the turn of comic ‘Eye of Stone’ and here to take us into the shadows is its writer Cy Dethan.

By my count, Eye of Stone is the fourth of my five scripting journeys into the Unseen Shadows, but it’s probably safe to say it’s the one I’ve been working on the longest.

For me, the character of Napoleon Stone is the Unseen Shadow at the heart of Barry Nugent’s occult-noir universe – a powerful fulcrum whose influence can be felt even in his absence, in the shapes and currents of the stories that form around him. Teacher, peacekeeper and weapon of last resort, his existence has galvanised bitter enemies into unwise alliances against him and reunited estranged brothers to fight by his side.

So… no pressure, then.

When Barry first approached me with the idea of writing expanded universe material for Unseen Shadows, Stone was one of the options he presented. Although I took a circuitous route via the Reverend and Bob Kelsey one-shots, characters I’d loved from the original novel, Napoleon Stone has been embedded in everything I’ve written for the project from the outset. The understanding of The Reverend that drove me through Wrath of God was grounded in the way Stone psychologically dissects him in Fallen Heroes. The Broken Heart cult that I devised for The Immaculate Abortion of Dina Leigh (and then returned to in Blood Cries Out and Eye of Stone), owes its political organisation and strategies almost entirely to the awe in which it holds the “Demon Stalker”. In fact, if you’re writing for Unseen Shadows at all, the hand of Napoleon Stone can probably be felt somewhere in infrastructure of your work.

Eye of Stone itself is designed both to shine a light on Napoleon and to preserve the central mystery he represents. I wanted to get inside the character’s workings a bit, but to emphasise the way his very existence informs the world he operates in. The Broken Heart’s predisposition toward the search for “saviours” made them a good fit for the one-shot, and having them find a relic of the Demon Stalker’s former life seemed like a strong frame for a story about his origins to hang in. At the same time, it provided an opportunity to demonstrate the sheer weight of the man’s influence in the radical upheaval a single encounter with him brings. The Children of the Heart fall and the Broken Heart is born.

While the backstory offered in Eye of Stone is neither exhaustive nor necessarily reliable, I’d like to think it does at least argue one point: that the best measure of stature is not the height you stand from the ground, but the length of the shadow you cast.

Eye of Stone will be out soon later n the year as part of the third Unseen Shadows comics anthology. 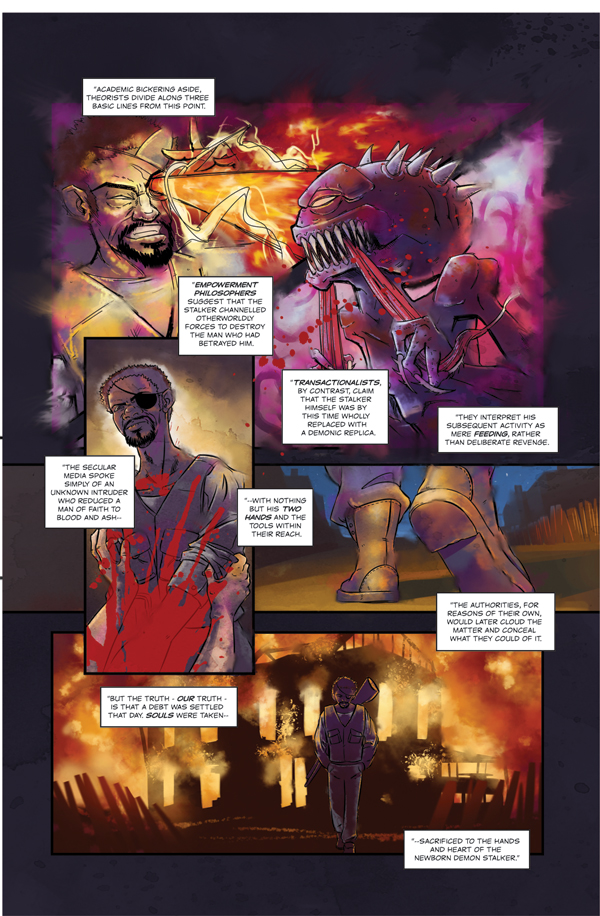