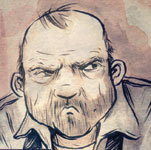 Bob did not voice any kind of opposition. The last thing you did was argue when staring down the barrel of a sawn-off shotgun.  He instead did what any sane human being would do when faced with a life-threatening situation: he wet himself. –  Fallen Heroes

During his ten-year career at the Enquirer, Bob Kelsey had developed a knack for uncovering great stories with very little information to go on.  His wife, Fran, preferred to describe his gift as being ‘the right bastard in the wrong place.

Kelsey  gets more than he bargained for when his latest story brings him into the world of the occult and Napoleon Stone.