So last weekend Unseen Shadows were in full effect at the Thought Bubble Festival in Leeds. I’ve made no secret that Thought Bubble is my favourite comic convention and this year only served to reinforce that fact. I’ve attended the con both as a visitor and an exhibitor and have  always come away with nothing but respect and admiration for the way the organisers run the show. On both days when I was either setting up the table or taking it down at the end of the day a member of the TB team always swung by to see if I needed any help. I found them to be nothing but friendly and helpful throughout the weekend.

There was a fantastic vibe to the show throughout the weekend and on the few occasions I got to leave my table there were some fantastic comics being sold. Anyone saying the UK comic industry is on the decline needs to check out Thought Bubble 2013 next year or one of the other brilliant UK comic cons.

In terms of the weekend itself I had a great time and caught up with lots of old faces and met several new ones. I also caught up with several of the Unseen Shadows creative team members who were in attendance to celebrate the launch of Tales of the Forgotten, sell their own wares or throw around ideas for new projects. I also got chatting to several artists and writers all looking to step into the shadows and join the creative team.

Sales went well for all the Unseen Shadows material and as usual I was pleasantly surprised with the amount of people who picked up a copy of the novel.

On the Sunday myself, Corey Brotherson, Cy Dethan and Richmond Clements headed over to the Alea Casino where we took part in a panel hosted by Yomi Ayeni to discuss the first official year of the Unseen Shadows company, how we got started, what we’ve accomplished to date and where we go from here. The panel included a first look at the brand new titles and ideas we’re working on. 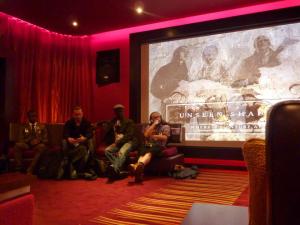 You can check out a video of the panel below and you can now order our newest title Tales of the Forgotten from the Unseen Shadows shop.